It may be nearly June but the weather thinks we are still in March and Bodrum skies have been grey and heavy. Jake is not very happy with the thunder, being suspicious of all sounds coming from the sky, so he is reluctant to go out for long walks, which is fine by me as I'm happy to stay around my Bodrum garden which is blooming marvellous thanks to all the late rain. Unfortunately we are not getting the downpours where we need them and despite a whole day of celestial rumbling yesterday, very little rain fell out in Mumcular and the reservoir is still too empty for the time of year.  Local farmers and market gardeners are very worried about being able to water their vegetable gardens. 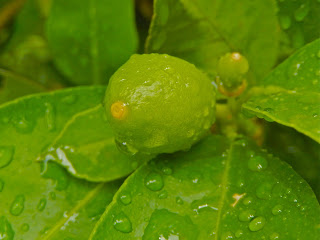 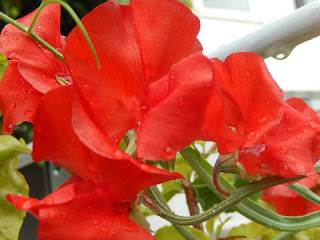 I love sweet peas and have tried unsuccessfully for years to grow them, but this year, seeds given to me by my daughter's Godmother Jeni, have bloomed beautifully.  I can only assume that the October sown seeds were confused by our unusually cold and long winter, and thought they were back in the UK. 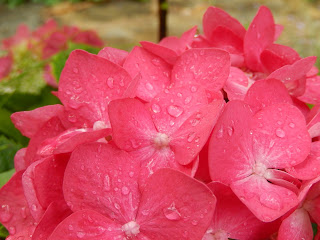 Another garden surprise is this Hydrangea.  I bought the plants last summer for my daughter's wedding. The petals were white when I got them and they turned more and more green as summer progressed until the leaves and flowers were almost the same colour. This month they have bloomed bright pink; a colour that was banned from the wedding so I know my memory is not playing up.

The sun is now coming out and the forecast for the next 10 days is sun, sun, sun - more than likely this won't change for at least 3 months. Time to take the dog out before he uses 'being too hot' as an excuse for not walking.
Posted by Unknown at 06:46 9 comments: Links to this post

Email ThisBlogThis!Share to TwitterShare to FacebookShare to Pinterest
Labels: Bodrum garden in May

So are we friends now? 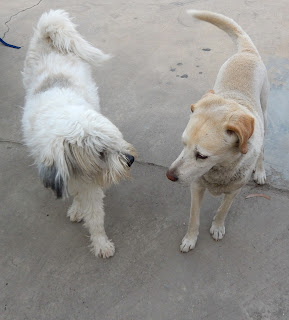 The mistress has returned from her travels and I am BacktoBodrum. I was quite enjoying my sojourn in Ortakent; my digs there are very comfy, no pesky stairs to negotiate, easy access to a garden with grass which is very important as I nibble it every day to sooth my dicky tummy, and a man about the house (much as I love continuous female adoration and tummy tickling, every dog likes a bit of masculine play-fighting).  The daily walks there are also superior to Bodrum - we skirt the golf course every morning and if I wasn't on a lead. I'd be very tempted to run over to the greens and lift my leg on those white poles with flags on.
I'd only been back in Bodrum a couple of hours when Nasty Dog who lives on our site came up to me and started trying to make conversation, I whipped round quick as a flash so that I could face him eye to eye to ask him what he was playing at. He was the resident dog when I first came to live in Bodrum nearly 5 years ago, and in all that time he has only ever growled or snapped at me and made it plain that we were not ever going to be on first name terms.  Now suddenly he is all over me.  I can only assume he has read my blog and realises that I am fast becoming a local celebrity.  That leaves me to quote the following:
'Fame is a bright flower, but weeds abound mostly around it ' *
Chew on that doggy!


*Edward Counsel - Maxims
Posted by Unknown at 02:38 7 comments: Links to this post

Email ThisBlogThis!Share to TwitterShare to FacebookShare to Pinterest
Labels: Dogs in Bodrum

The Magic of the Island

After a week spent in England socialising with family and friends, my liver is enjoying a much needed rest in Hydra.  I've swapped my usual glass of red wine for a pot of tea and dinner is a simple Greek salad. If I can keep this up for 10 days I might fit into my summer clothes. 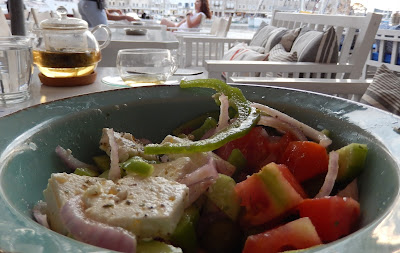 The ferries and hydrofoils have been hit by a 4 day strike so the island has been particularly quiet; not good for the tourism trade, but great for those of us who arrived on the Monday and don't have any urgency to get off the island. 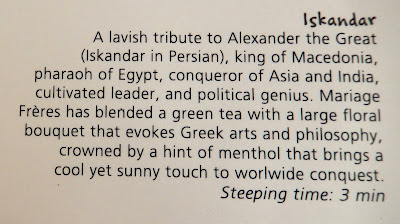 I usually take a book with me when I eat out but Greek menus make good reading. I've never encountered a quote from an ancient historian in a Turkish or British restaurant, and my tea tastes much better knowing that any attempt at world conquest will have a cool yet sunny touch. 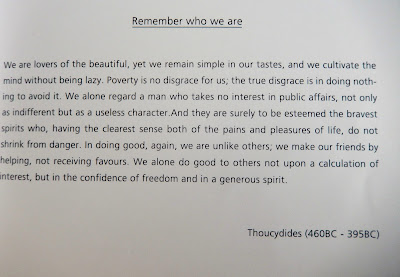 I'm not just sitting around in tavernas; getting to them involves the up and down of 200 to 300 steps. Despite my many visits, I still miss-judge where I am and yesterday found myself on a steep staircase where every narrow polished stone step sloped at 45 degrees.  Edmund Hillary would have been proud of me. 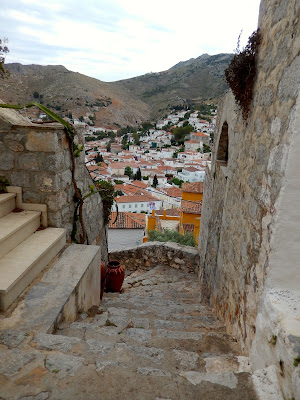 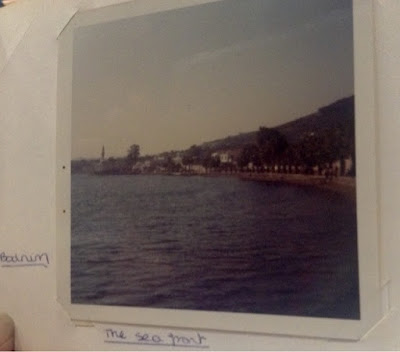 This is a photograph of Bodrum taken in 1974.  In March of that year, a group of school girls from Rugby High School got their first taste of Turkish Delight and weren't very impressed. We had already had our bottoms pinched in Italy and were getting used to the amount of attention a gaggle of 15 year old girls attracted in the Eastern Mediterranean, but we were unprepared for the Bodrum men and boys who took every opportunity to put their hands up our skirts. So time-consuming was the effort needed to avoid this that I can't remember where we went or what we saw in Bodrum. Our PE teacher, Miss Munden, a wonderful woman whose ample derriere, in my memory, is always encased in a grey tracksuit, was driven almost to distraction by this unwelcome intrusion and spent a lot of time shepherding the more delicate souls (me included), trying to keep our honour unsullied. I vowed never to set foot in Bodrum again - so much for that resolution.
I have only one other memory and it has stuck with me for 45 years. As we were about to leave, Miss Munden realised that someone was missing and I can still see her dashing around Rasit's cafe shouting, "Pauline Garratt,  Where's Pauline Garratt?"  until the eponymous young lady turned up, as cool as a cucumber,  on the back of a scooter.  I was so impressed. How I wanted to be Pauline Garratt that day.  She'd been off to see the Mausoleum.
I lost touch with Pauline 40 years ago, but her name comes to mind every time I walk through the square by the castle, so it was fantastic to find her again last Saturday, and she still the sort of person who would be up for any petty rule breaking.

She is sure there were a few of them that nipped off to the Mausoleum, but I only recall her name  echoing around Bodrum.  She does remember coming back on the moped though, which is reassuring as I had begun to wonder if I'd made the whole thing up. 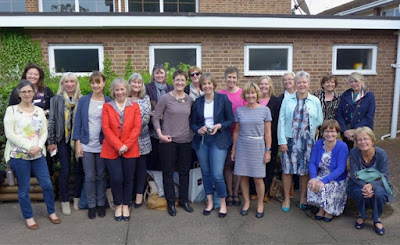 Forty years on, the RHS class of 1977 is still looking good and one afternoon wasn't enough time for all the stories we have to tell.  We must do it again soon.

Email ThisBlogThis!Share to TwitterShare to FacebookShare to Pinterest
Labels: Bodrum 1974

Out with the sour 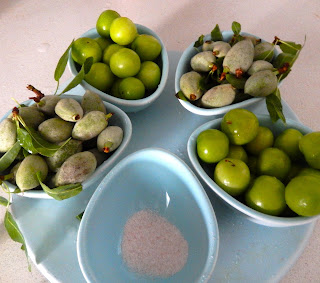 Spring is a time of indrawn breath and pursed lips as the uninitiated take a bite of these green shiny fruit and wince at their sourness, or wonder what to do with the furry almond they have politely popped into their mouths to please a neighbour.  It takes a while, but once you have lived here for a while, salty sourness is a welcome taste as the rest of the year is going to be sweet, sweet, sweet.  If there are any left on the trees, the green plums (erik) will be turning pink and the almonds (çağla) will  be developing their shells.  Strawberries are already spilling over the market stalls and the first cherries will soon be affordable (it is never worth paying the arm and a leg for the first fruits). Before long we will be overwhelmed with the sugar rush that a ripe yellow melon or squidgy peach provides and will look back and yearn for the sharp clean taste of a Spring.
Posted by Unknown at 12:01 12 comments: Links to this post

"There is only so much fake dancing you can do"

I'm happy to do almost anything to get a good blog post but this was very much out of character. I'm probably the last person to get up on the dance floor so dancing to order, to no music, on a balcony in a night club in the middle of the afternoon was way beyond the call of duty.  There have been many calls on Facebook for extras to take part in 'Holiday,' a Danish-Dutch produced film being made in Bodrum.  I approached the film's fixer to arrange an interview with the director but despite a couple of emails, this didn't come off.  My friend Jane Ecer had already taken part in an airport scene and I persuaded her to come back to Bodrum to join in with another scene. We were originally scheduled to be at a hotel in Gumbet so I had envisioned sitting beside a pool sipping a cold beer.  On the evening before the shoot, an email arrived asking us to wear sparkly clothes, high heels and carry small bags and to meet at the Bianca Marina Club in Bodrum.  I searched through my wardrobe wondering if some remnant of my 1980's disco days lurked in a dark corner. If I had found one, the extra 14 pounds  I now carry around would have made trying it on too dispiriting for words.  I did find some heals, and I still have the plasters on my toes to prove that I wore them for a couple of hours. 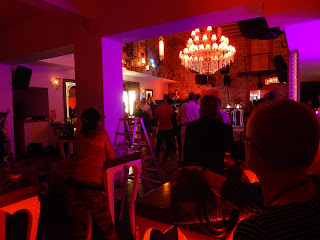 The film team were new in town, so they had no idea that the club had only just changed its name to 'Bianca' so finding the place was the first hurdle for some.  Luckily my constant dog walking had taken me past the place and I'd noted the new sign being put up outside. It is a venue that changes owners and identity so frequently, very few locals would be able to tell you its current name.  It's now looking very good so I hope 'Bianca' is around for longer.
Our call came after an hour waiting outside in the sun, so we were happy to slip into the blacked out club and practice our moves on the balcony.
The quote above comes from Alex. Ever cheerful, even he, after 10 takes and a round of cocktails that were just coloured water, was losing his joie de vivre. 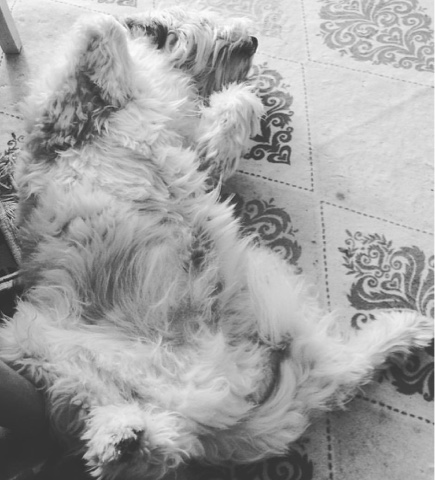 Oh the relief.  The boss is away and I can kick back at my two-legged sister's house..
She doesn't make me write a blog post twice a week.
I can lay around doing nothing all day.
Bliss!
Posted by Unknown at 08:18 6 comments: Links to this post