Basalt pillars on the Bodrum peninsula. 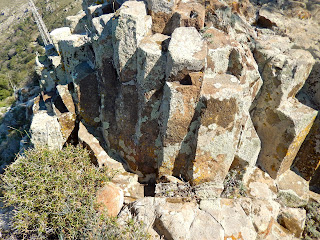 I know very little about geology so welcome more educated comments on this subject, but want to draw your attention to the columns of basalt in the hills above Gümüşlük.  I last visited some 30 or more years ago and had to follow a rough path which headed up from the village, in the general direction of the solitary windmill, and then veered right. I was accompanied by a client who had heard that the rocks signified the meeting point of ley lines and was keen to experience the spiritual vibes. This may explain why I didn't learn much about the geology of the area on this visit.  On Wednesday, we were able to drive to within 50 meters of the rocks and were accompanied by geologist, Ursula, so this time I did learn how these photogenic volcanic rock formations emerged.


Columns of basalt are formed when basaltic lava, which is hotter and moves faster than other kinds of molten rock, cools relatively rapidly, causing vertical cracks to form which result in the hexagonal shapes you see on the surface. The Giants' Causeway on the North East coast of Ireland is one of the best known examples of this phenomenon and our versions are tiny compared to these but worth a visit nevertheless; sooner rather than later as these rocks have already been cut through to provide an access road to a construction site. 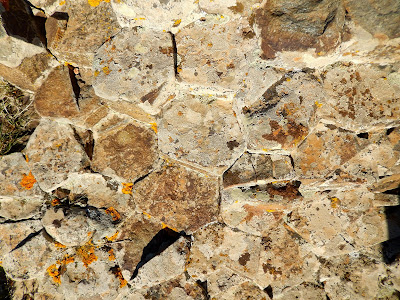 Email ThisBlogThis!Share to TwitterShare to FacebookShare to Pinterest
Labels: Geology of Bodrum 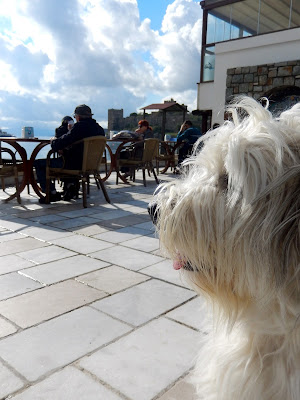 In my last post you could see this shoreline being pounded by waves and pelted by rain. Four days later, we are sitting enjoying a coffee in the sunshine.  This is why I enjoying living in Bodrum.  No matter how bad the forecast is, sunshine and blue sky will always make an appearance before the next bad weather belt moves in. 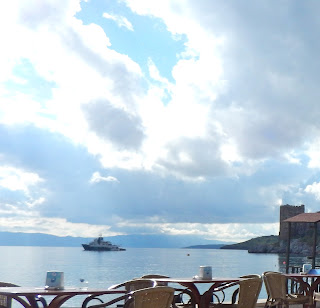 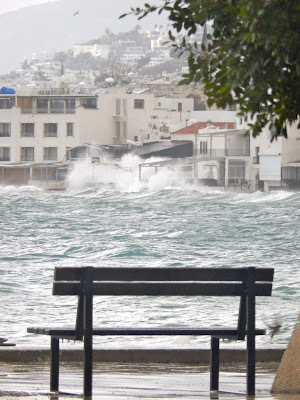 My mother, Maggie, is staying with us this month and her friends in the UK keep asking her if she's enjoying the hot weather. These pictures will finish off that idea! 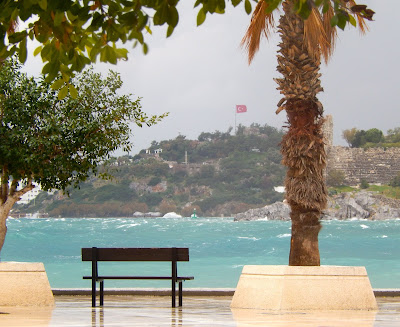 These photos were taken on Sunday from the shelter of Berk Balık restaurant. 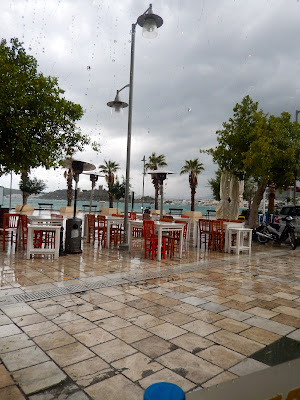 January is a month of wild Lodos winds from the South that are warm but come with lashing rain and occasional hail, alternating with North winds that herald crisp mornings, bright blue skies but very low temperatures. This is our hibernation month where we disappear under duvets, electric blankets, triple socks and balaclavas - dreading the arrival of our electricity bills as any heat generated inside a modern Bodrum house goes straight through the walls.  We don't feel too aggrieved, this time last month we were sitting at these tables enjoying the sunshine and we will probably be back again before long.
Posted by Unknown at 02:18 20 comments: Links to this post

You already know what I think about about Bodrum.  I thought I'd ask Jane why she travels up to Bodrum on a regular basis, given that her home town, Marmaris, is also a picturesque port and holiday resort on the Turkish Riviera. 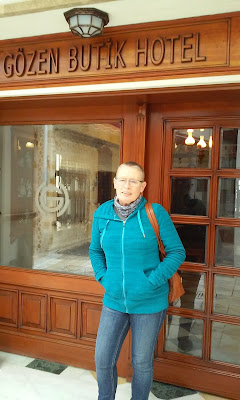 Bodrum has always had a touch of the exotic about it for me;  from the distinctive sugar-cube buildings and being home to one of the Seven Wonders of the Ancient World to the fact that in 1987 I used to travel from Marmaris for the delights of its Chinese Restaurant (still there on the seafront).  On first going to the Halikarnas Disco I realised it was better than any club I'd ever been to in London and its location on the seashore was second to none.

Nowadays I make the journey by bus for the shopping ... and the cafe-life.  Bodrum has several shopping centres with international brand names as well as a main high street lined with shops and the myriad streets around the castle that are home to many delectable independent stores. It was the opening of the tiny M&S just across the road from what was Karada Marina (now Bodrum Marina) that first got me hooked on the idea of specifically visiting Bodrum for shopping.  I used to work in the branch of M&S in Oxford Street known as The Pantheon Store and I wondered at the difference between the stores, with the Bodrum one being in such a gorgeous location.

No shopping trip is complete without lunch somewhere special and there are many delightful places to choose from.  One of my favourites is Gözen cafe right by the sea in Bar Street (it's mostly run by women and has a great range of imported beers including my favourite Guinness) and if my husband Recep accompanies me (he loves shopping even more than I do) then we stay at the charming Gözen Butik hotel next door (wonderfully managed by Ayşe Hanım); we've spent the last four Christmases doing exactly this.

I try to make the journey at least once a month;  I don't care if I don't buy anything but I love to browse.  The staff in M&S in Oasis Centre greet me like an old friend, in fact for a long time they thought I lived in Bodrum and went on holiday to Marmaris! And what's missing  from Bodrum? Oh for a John Lewis ... that would be shopping perfection.
Posted by Unknown at 08:40 10 comments: Links to this post 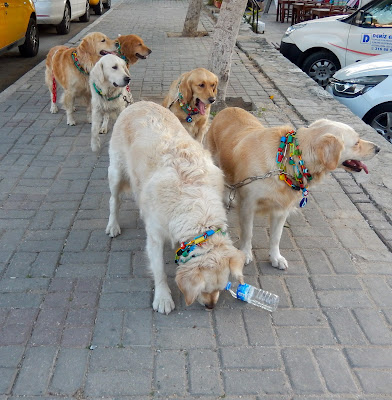 In May last year, I wrote about Şenol Özbakan and his 6 golden retrievers.  Şenol is still living in his minibus on the edge of the industrial estate but he now has access to electricity and has got his TV and cooking facilities set up and the dogs have their cushions on the pavement when it's dry. He seems very fit and healthy and in good spirits although saddened by his first dog dying of old age last summer. Another goldie from the street has taken Şesu's place so he still has six dogs and he's feeding another homeless dog who doesn't go on the walks but stays close to the minibus. 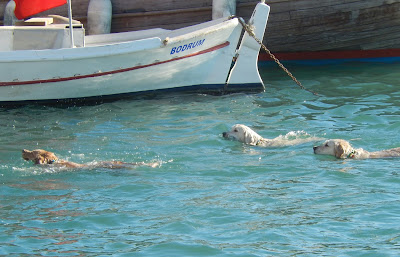 The dogs go for a long walk around Bodrum every day and swim if it's warm enough, which usually attracts a small crowd with iPhones at the ready. 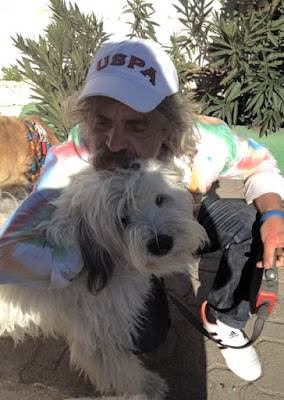 Jake and I are met by the dogs every morning as we come back from our early walk and Jake is a bit intimidated by the golden crowd descending on him in full woof mode. Yesterday Şenol came to see what the noise was about and to show his canine followers that Jake was friend not foe, he got a big hug from the pack leader. Hopefully this initiation will make our morning walk a bit quieter.

http://backtobodrum.blogspot.com.tr/2015/05/bodrums-golden-retriever-man.html
Posted by Unknown at 02:01 27 comments: Links to this post


As I walked with Jake through the streets of Bodrum yesterday I heard David Bowie singing from many of the shops.  A fitting tribute to a hero who provided the sound track to my teenage life and beyond.  The opening bars of "Jean Genie" take me back to school and the wonderful feeling of first rebellion at listening to a strictly illegal radio on the edge of the hockey pitch.  I wondered if any of those working in the shops had been born when Bowie walked the streets of Bodrum in the flesh.  In 1981 and 82, Theseus of Attica, a beautiful old school Motor Yacht was based in Rhodes and thus frequently visited Bodrum.  Oona Chaplin was a regular charterer, and we yachties often came across her caftan draped figure in the local bays.  The crew of Theseus would tip us off when David Bowie was her guest and about to dock in Bodrum, so those in the know could sit in Raşit's Cafe and watch (at a respectful distance) their musical hero.  Sounds like stalking I know but the strange thing now is that we never took even one photo.  I've just googled David Bowie and Oona Chaplin and there seems doubt about the relationship between them but I well remember the crew of Theseus saying that they were having an affair and sharing a 91 feet of space, they would know. How different things would be today - we'd have been snapping photos left, right and centre on our phones and plastering them over the internet - But the crew would have signed water-tight confidentiality contracts so they wouldn't have been able to tip us off.   I prefer the former.

Email ThisBlogThis!Share to TwitterShare to FacebookShare to Pinterest
Labels: Bowie in Bodum

Last year I had the pleasure of meeting fellow blogger Özlem, her parents and her two children. We had bonded over the Internet on all matters culinary and it was great to find that we had lots in common when archaeology, classics and a dog were added to the mix. We were both pushed for time so we didn't get to chat for long but a wish for 2016 is a chance to meet up again to show her family some of the more obscure ancient sites around Bodrum and sit down over a plateful of meze. 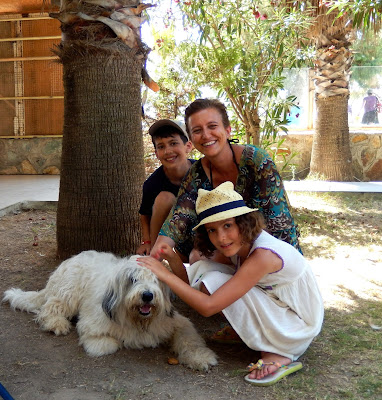 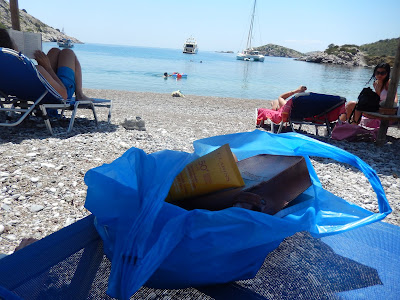 A plastic bag, camera and sun cream, there's a notebook in there too somewhere. My souvenir of a June day on a Greek beach - I say a day, but it was for just 4 hours that I took a break from my catering commitments and jumped on a day-boat and lazed on a beach. Hopefully   2016 will be a year of taking more breaks when working and seeing more of Greece. 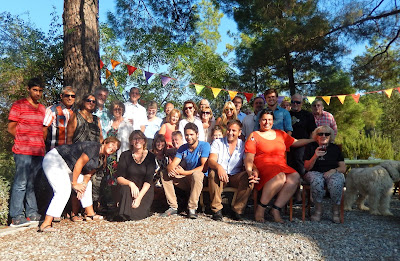 And the BIG one. A terrace full of good friends, some of whom have been partying under these trees for 25 years.  This Autumn photo records us all celebrating my daughter's engagement.  Next October we'll be hiring tables, filling bags with petal confetti, donning glad rags and watching the young couple exchange vows.  We aim to make it a party to remember.

BacktoBodrum blog is 4 years old this week but there won't be many posts from me as we are busy celebrating my mother's 90th birthday. 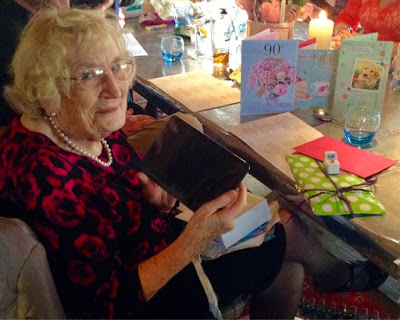 Posted by Unknown at 11:04 8 comments: Links to this post