www.backtobodrum .com
Posted by BacktoBodrum at 00:57 No comments:

The BacktoBodrum.com site is up and running but I still haven't managed to switch my mailing list over so I will continue to put some of the more important posts on Blogger.
If you are a Facebook user, you can like my BacktoBodrum on Facebook page and you will see all the new posts.
Do watch the video below - an audacious tomb raid the thieves felt so comfortable executing that they make a home movie.

A new museum has quietly opened in Milas. If there has been a grand inauguration, I’ve missed it.  This low key start belies the exciting archaeological find in the centre of Milas, the discovery of which would make a great Hollywood blockbuster – I can already see George Clooney as the lead.
In 2010, a daring tomb raid was discovered. The thieves rented a house in the dilapidated centre of Milas,  drilled a wide tunnel down  several metres and then across until they bored through  marble and discovered a sarcophagus surrounded by elegant wall paintings.   All this went on without the authorities getting wind of it. Travelling back from Istanbul one time we met a chap whose mother lived in an old house very close to this escapade. She constantly complained to her family that she could here strange noises and they just told her that she had tinnitus. So confident were these thieves/treasure hunters that they then made a video of their discovery and it’s on YouTube for us all to see.      https://www.youtube.com/watch?v=dWSKwMkAWPg

Who organised this raid is still unknown (or unpublished). Through all my time organising tours to the area, this part of Ancient Mylasa was referred to as a temple so it was news to many of us that there was a burial chamber here and the excavations started after the raid was discovered have pretty much proved that this is was a mausoleum dedicated to Hekatomnus, father of Mausolus  ( So should we now call all mausoleums – hekotomneums?).

From now on BacktoBodrum will be at www.backtobodrum.com The Blogger site will continue but I won’t be updating it regularly and I hope all regular visitors will switch over to the new address.  Sorry to give you something else to do but I hope you will stick with us.
Posted by BacktoBodrum at 06:02 2 comments:

A foot or two in Sagalassos


The human foot is a masterpiece of engineering and a work of art.
Leonardo da Vinci 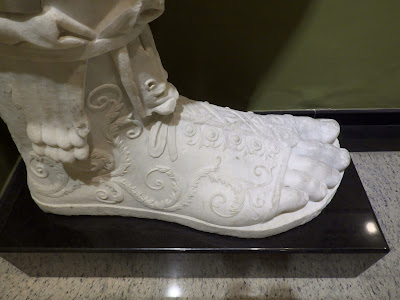 I've been dragging my heals writing about Sagalassos so it’s about time I put my best foot forward and stepped up to the challenge. This will probably be my last post in Blogger as I have just signed up to Bluehost with a new address www.backtobodrum.com and will be switching to Wordpress so I can continue blogging on my phone. It is not proving easy to master the new format even with friend Simon doing all the hard work.  It is fitting then to dedicate this post to Marcus Aurelius,  one of the five ‘good’ Roman emperors - philosopher and stoic, whose marble head and two legs remaining from his giant statue, were discovered in the bathhouse at Sagalassos  and now sit in the Burdur Museum. 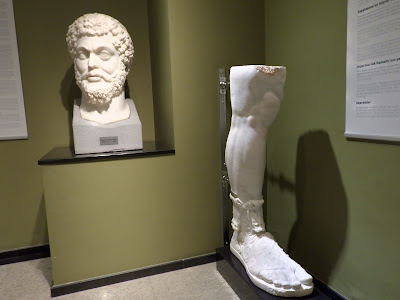 His writings, which later became known as ‘Meditations’ are widely regarded as one of the most influential philosophical works and have inspired leaders through out the centuries. A stoic attitude will help combat the urge to throw the computer out of the widow as I fail to get to grips with Wordpress. 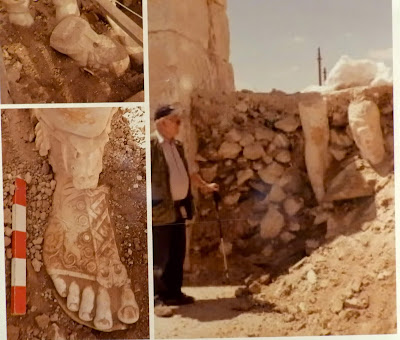 These photos of the excavation were displayed at the site. Oh  to have been there when the first tentative sweeps of a trowel uncovered one  toe, then the next. Although from the above photo, it looks like his knees saw the light of day first. 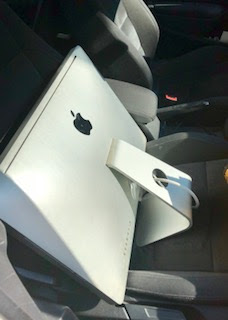 This is not what I envisaged ‘Blogging on the go’ to be but it has been the only way I could get photos on to my page.  As I left the village house, my trusty German car reminded me that I had a precious cargo in the front seat and I had to stop to fix the seat belt around my desk top.  This strategy is obviously no use for travel further a field so this weekend I will endeavour to swap BacktoBodrum over to Wordpress, which hopefully can be fully managed from an iPhone or iPad. I’ve been with Blogger for nearly 7 years and it has been fine for what I wanted but a shove is as good as a push and I’m being belatedly kicked up to the next stage.  All tips and suggestions for a smooth transition will be gratefully received.
Posted by BacktoBodrum at 03:38 5 comments:

I'm very excited that Özlem is coming to Bodrum. Don't miss her talks in the downstairs lecture room in the Oasis Shopping Centre on Thursday 25th October.  English is at 15:00 and Turkish at 16:30.  There will be a chance to get a signed copy of her wonderful cookery book which no kitchen should be without. Further details of her Bodrum demonstrations and worldwide travels are available on clicking this link 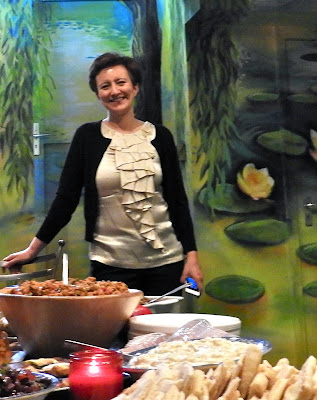 Özlem Warren's Blog  has been my go-to destination for recipe checking and inspiration for several years now.  I joined the chorus of her many friends urging her to put all her recipes in one place and write a book.  She has gone further than this and produced a cookery memoir that paints an aromatic picture of what it is like to grow up in a Turkish household that appreciates its Eastern Mediterranean culinary heritage. Özlem has written a book that is so lovely to look at that my copy will be kept on the coffee table, not on the kitchen shelf. 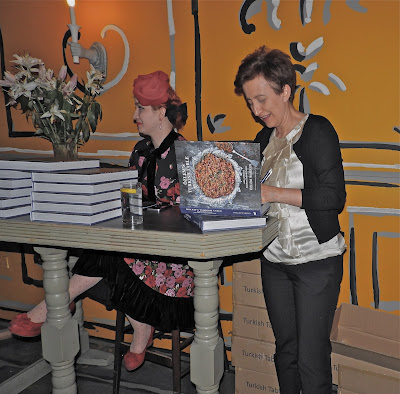 Congratulations to Özlem for creating a work of art - on the page this time rather than on a plate, and to have sold over 700 hardback copies before the book has hit the bookshops, shows how many fans she has around the world.

Email ThisBlogThis!Share to TwitterShare to FacebookShare to Pinterest
Labels: Ozlem Warren in Bodrum

This is a test to see if I can add photos on Blogger using my iPhone and Google drive
Posted by BacktoBodrum at 02:01 3 comments: 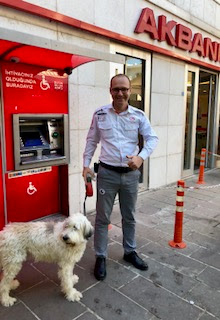 Taking a dog into a bank in the past was a bit of a grey area, sometimes we were let in sometimes shooed out but today Murat, the friendly security guard at Ak Bank, confirmed that legally all well behaved pets on a lead have to be allowed to accompany their owners into the bank. That's very good news for Jake and me as I can now comfortably do my banking during our morning walk rather than before or after.
Posted by BacktoBodrum at 12:12 7 comments:

Email ThisBlogThis!Share to TwitterShare to FacebookShare to Pinterest
Labels: Dogs in banks

Bodrum is buzzing but I can’t show you the pictures

Where is the photo you ask - I’m asking the same question on every forum I can find about blogging. After losing my iPad and iPhone in the same week, I decided to buy a big phone to take the place of both. As everything is backed up in iCloud, I chose an iPhone 8 Plus with all the bells and whistles and massive price tag.  I have used the Blogger app on my iPad for the past 6 years so assumed I would just carry on only to find that it is no longer available for iPhones. I can use the web version on my phone to add text but it won’t download photos.   Hours of trawling the net came up with an app only downloadable to an iPad. Friend Angela luckily had an iPad mini for sale at a non-eye watering price, so I drove over to Yalıkavak on Sunday to collect it.  I set it up, installed the app to find that despite the description in the App Store, it didn’t support Blogger.  The only alternatives I have now are to 1. Buy a Google-friendly tablet or 2. Swap the blog to Wordpress.  Or I just have to stick near my desktop which still supports the blog but as it is now over 10 years old, there is a fair chance that it will give up the ghost soon. The first option is more expense, the second is daunting.  Any advice would be very welcome.
Posted by BacktoBodrum at 00:25 10 comments:

Email ThisBlogThis!Share to TwitterShare to FacebookShare to Pinterest
Labels: Blogging problems with iPhone

Paws for a coffee 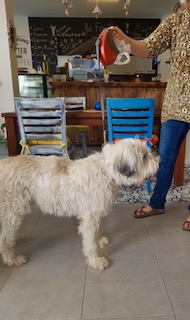 A pause was needed today - a dash in the pouring rain on Monday with a rucksack full of shopping lead to a smashed iPad.  Old age (the phone, not me) caused my iPhone to black-out on Thursday resulting in confusion over a missed rendezvous, (sorry again if you are reading this!)  A miss-placed brush while painting and drinking G&T at the same time ended with the glass and now purple drink crashing down on the floor.  Today was a day of picking up pieces.  It started well with a trip to Şule's to choose a colour for my new kitchen cupboards.  The shop wasn't open but I spent a very pleasant 30 minutes in Joy Art cafe next door, drinking very good coffee with Jake by my side.  I'm very happy to find another comfortable spot that allows well behaved dogs inside.  We shall go back to sample the food.