“Treat all disasters as if they were trivialities but never treat a triviality as if it were a disaster.”   — Quentin Crisp
I haven't written for a while because there are a couple of subjects which cry out for comment, but committing thoughts to paper has been too depressing to contemplate so it is easier to just avoid writing anything.  But, I've given myself a good talking to, had a good look around and have convinced myself that the vast majority of the Bodrum population neither wants to legitimise child abuse nor to build on every available inch of green space, so I will avoid discussing these subjects and write about an afternoon which made me glad I live where I do.

After the wedding, my daughter and her new husband travelled back to their honeymoon hotel in a minibus so their car was left with me.  I offered to deliver it back to them at the hotel and get a bus back to our village.  Being able to get home on public transport is still a novelty for me as for years we had none. Now there are buses from Bodrum to our village at noon and a few in the early evening.  I was aiming for the midday bus.  I delivered the car to the hotel on one side of Bodrum and power-walked to the garage on the other side of the town, picking up prescriptions and lost sunglasses on the way, and was standing at the bus stop by 11:55.   But the bus didn't pass by.  At 12:15,  I was convinced that the route must have changed and I'd been standing at the wrong bus stop so I walked back into the main garage, pretty much convinced that I would have to wait for the next bus at 5pm. No one was sure what had happened to my midday bus, but the driver of the Camlık/Etrim bus recognised me, knew where I lived and told me to hop on. Thus I was given an 40 minutes long, unguided tour of the back roads of villages I have only every driven straight through. After dropping off all his regular passengers, he drove me a further 8 kms to my garden gate and wouldn't take anymore than the regular 6 TL.  This doesn't happen on public transport in the country of my birth and I must keep reminding myself that it is the people who define a country not its politicians. 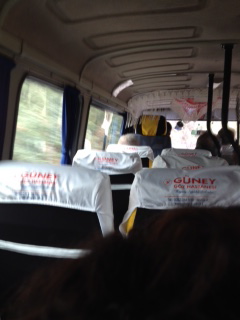 Posted by BacktoBodrum at 09:34