My journey as a cook started on an archaeological dig. Once I found out that you got paid a lot more for dexterity with a sharp knife than a blunt trowel,  my career path as an archaeologist wavered and within 2 years I had swapped muddy knee pads and waterproof trousers for a sarong and sun hat, and was head cook and washer-up on a sleek charter yacht in the Med.  I would have probably gone straight into cooking after school, but grammars in the 1970's were all about going to university and girls were only allowed to carry on in home economics if their grades in "proper subjects" had slipped.  It's refreshing that a career in food is now an accepted career path, and is one that you can join at any time of your life.
I met three ladies last week who were all about enjoying good food.  Selen, an archaeology and history of art graduate, runs Culinary Bodrum, an agency that organises foody trips and workshops. Read all about it below.  Zeynip Casalini is a well known singer and also runs Begonvil restaurant in Oasis, Bodrum. She is a raw food convert, and it was to watch her make nut milk, avocado "cheese" cake and hummus from raw chick peas that we gathered at the Kumquat Restaurant, opposite  the entrance to Bodrum Marina. Pelin is a "super chef" with an impressive cv and a book coming out about cooking offal. She is also part of the Culinary Bodrum team and consultant chef at Kumquat.

A Mediterranean diet is already heavy on raw food, but an afternoon with these three has spurred me on to include more raw ingredients in my diet.  I am eating an apple as I write!

If you are in the Bodrum area, there is a pasta class tomorrow. Details on the website. 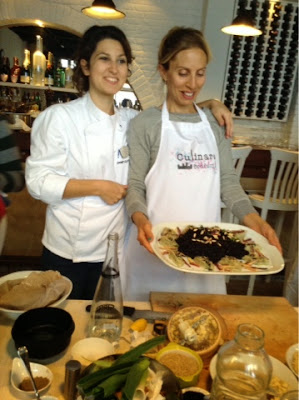