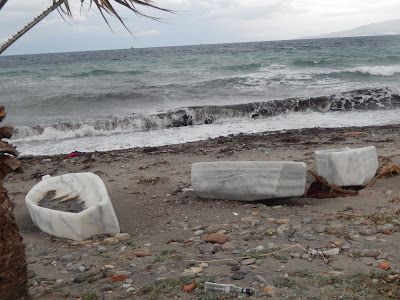 A walk along a beach on the Southern shores of the Bodrum peninsula is a thought provoking activity these days. We no longer see refugees in Bodrum but their presence is revealed by the shoes, clothing and rubber dinghies washed up on a few beaches. I don't know when these marble sculptures were placed on the sand but they are extremely unsettling as they face Europe, just a few miles away. Boats made of marble and looking like stone coffins. 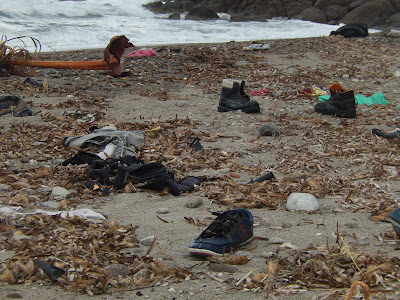 I was in Greece recently and was upset to hear educated Athenians hold forth on how the Turks are herding refugees into boats to be rid of them.  All the time I listened I was mentally battling the urge to put them straight and thus declare my Turkish allegiance. When I heard for the fifth time that Turks were doing nothing to stem the flow and just wanted the EU money, I threw in the towel and gave them the facts. Road blocks are active all the time to stop refugees reaching the coast. The Coastguard boats are out every night and bring back 100s of men women and children every week. In Bodrum alone sometimes 300 are brought back in one night and every one is then seen by the local police and a doctor.  Local captains have formed their own association to patrol the coast and rescue those in danger. The cost of this is borne locally. Human rights lawyers hand out pamphlets telling the Syrian refugees what they are entitled to in Turkey (free health care, free pharmaceuticals, free education and Turkish lessons as long as they register in a designated municipality) and give out telephone numbers where help can be found.  Local volunteers provide dry clothes, food, sanitary goods and toys but despite this the majority of families still risk the crossing because hope lives in Europe not in a Turkish refugee camp.  Some try again and again despite nearly drowning on a previous trip. And the EU hasn't handed over the money. 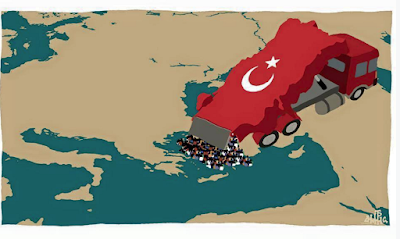 When I got back to Turkey I saw this cartoon on Facebook, shared by a Greek speaking acquaintance, copied I assume from a Greek magazine.  It came with no text but speaks for itself.

It seems that this disaster is becoming an exercise in shifting the blame while those that sell the weapons and create the power vacuums are sitting safe and sound.

Bodrum Humanity Association  Offering help to all those in need in the Bodrum area.

Email ThisBlogThis!Share to TwitterShare to FacebookShare to Pinterest
Labels: refugees in Bodrum