Ortakent Acı Ot Festival didn't get off to a great start as the heavens opened as we were setting up the stands and as each downpour passed by, an ominous black cloud loomed ready to soak us again. We were all seriously questioning the organisers' decision not to move the event under cover, when the sun appeared and the event continued in glorious Spring weather (for a few hours at least until it chucked it down again)

The festival is one of a series of three this month celebrating the great food of the region, especially the wild greens that are prolific at this time of year. If you missed last week's one in Çamlık and this week-end's in Ortakent, there is another in Bodrum, Kumbahçe next week-end with an emphasis on the area's Greek connections. It's no surprise that the Greek word horta is so similar to the Turkish ot, both cuisines prize the collection of early wild greens from the fields and mountains and serve them with plenty of olive oil and lemon juice.  Both the collection and the eating of ot/horta is a very healthy occupation.

I didn't collect my wild asparagus/tilkişen to make my quiches, I bought it from the local market but I know exactly where it grows in my village garden - unfortunately so do half the villagers and I'm rarely up early enough to harvest it myself. 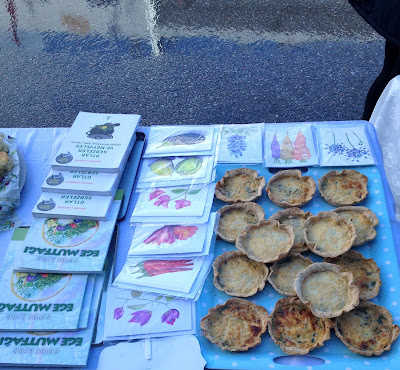 By two o'clock on Saturday, my pastries had been sold and I was flighting a losing battle with the wind to keep my cards on the table so I called it a day but cars and people were still pouring in and I'm sure the attendees will be counted in thousands.
Standing behind a table I missed the cookery demonstrations and guided tour of the tower houses but heard good things from those that joined in. 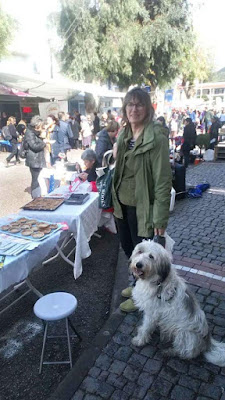 Jake make a short appearance but a hairy dog behind a food stall is not the best advert so after a bit of barking at the camels,  he went home with Esi.
Posted by Unknown at 09:40